What’s the difference between the ‘Brain Training’ offered by Lumosity and BrainTrainUK ?

Why all ‘brain training’ is not the same

Lumosity, an online ‘brain-training’ service that provides brain ‘games’ intended to improve brain function,  hit the news a few weeks ago as they have agreed to pay $2m with a threat of $50m as part of a settlement following allegations of  ‘the deceptive marketing of a brain-training program’ – settlement is here.

The issue was that Lumosity were  said to have made marketing claims that were not supported by the science and the avoidance of the extra $48m payment is contingent on them not making claims not substantiated by ‘competent and reliable scientific evidence’ that using Lumosity:

It should be stressed that Lumosity do not admit that they made misleading claims and we have no reason to believe that the ‘brain training’ tools offered by Lumosity or BrainHQ have no value. After all, the way we prepare for maths exams is by doing past maths exam papers.

But we do know they have one thing in common – they are completely different from what we offer at BrainTrainUK.

What they offer is analogous to what Chris Argyris called ‘single-loop learning’. Argyris studied organisations, and our brains can be likened to complex organisations. Single-loop learning is about detecting errors and correcting them, by trying again. In the case of brain training games like Lumosity and BrainHQ the idea is that by repeatedly trying brain exercises we will get better with practice. 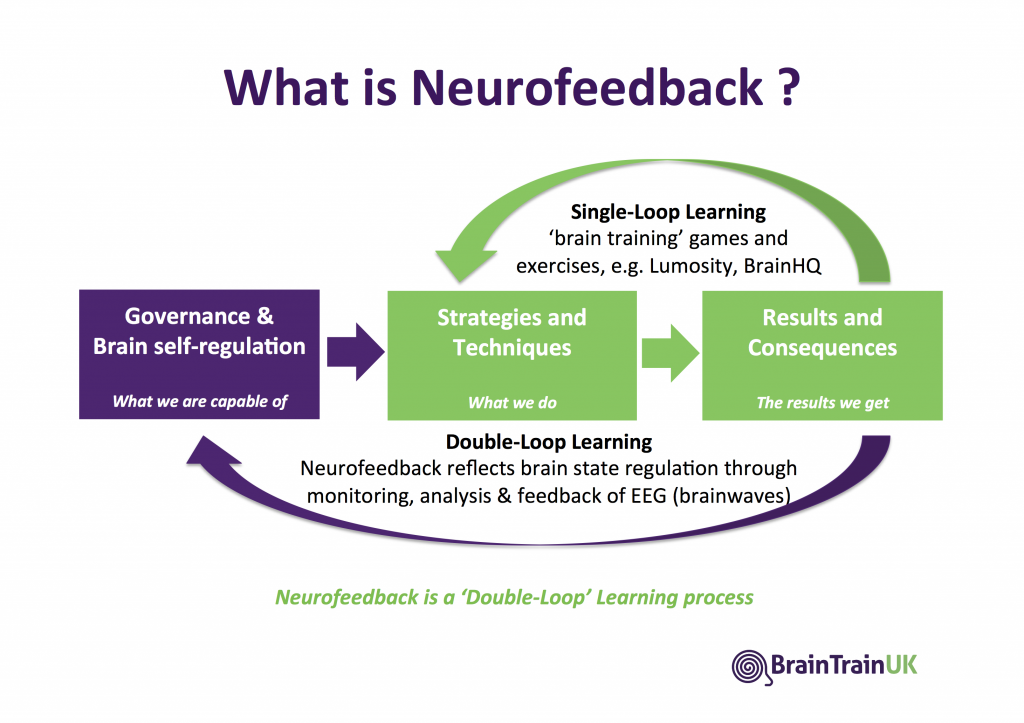 In brain terms we can think of these ‘governing variables’ as being akin to brain regulation, the way in which the brain regulates itself, how it adjusts levels of arousal and how it manages stability, in response to circumstances. And it is this ‘double-loop’ learning process that Neurofeedback as practiced by BrainTrainUK facilitates, by feeding back to the brain, in real-time, information on the brain’s own state. By reflecting this information back the brain can learn to work better in a fundamental way beyond just ‘trying again’.

We think this judgement is an indication that the authorities are becoming more aware and assertive to use their powers against the upsurge of marketing claims made for various ‘Brain’ devices and services without being backed up by facts.

We would encourage any potential customer of these devices or services to ask for the evidence of any claims, and don’t assume that just because something appears in a glossy magazine that their claims are valid.

Click ‘Contact Us’ or call today to learn more about BrainTrainUK, ‘the Neurofeedback practice you can trust’.