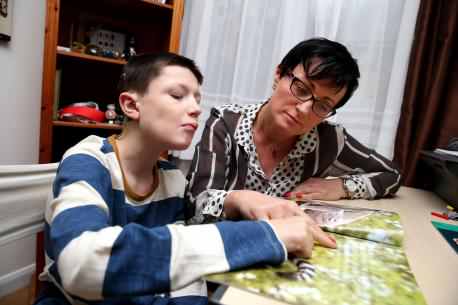 A 10-year-old boy left paralysed after surgery has had pioneering treatment to help repair the damage.

Mikolaj Krasnodebski was born completely deaf and his condition was made worse when an operation aiming to correct his hearing resulted in a complication which led to facial paralysis at the age of five.

Now a brain training programme that uses technology originally discovered by Nasa has changed his life, according to mother Aggie.

The 42-year-old said: “Being deaf had a huge impact on Mikolaj’s life, particularly his self-confidence.

“He would find it hard to concentrate and he couldn’t function at school or communicate with his peers.

Mrs Krasnodebska, who lives in Queen’s Road, said the situation was heartbreaking and she began desperately researching a method called neurofeedback, and came across BrainTrainWA.

The training provides a non-invasive treatment that uses neurofeedback technology, which was originally discovered by Nasa in the 1960s, to retrain the brain.

Sometimes referred to as “brain training technology”, the programme requires participants to wear electrodes on their head to monitor brainwaves.

This allows practitioners to send information back to the brain to stimulate learning using specially designed video games, or neurofeedback-enabled videos.

Mikolaj has since had hearing aids implanted in both ears, meaning he can hear as much as others his age.

Mrs Krasnodebska said the impact of the programme was life-changing.

She added: “Mikolaj’s concentration increased from three minutes to 15 minutes, which had a huge impact on his confidence and self-belief.

“While there is still a big gap in his education, he has improved so much and is finally catching up.

“The most important thing is he doesn’t feel stupid anymore.”

Mikolaj attends Central Primary with his younger brother and said rather than dreading going to school he now loves it.

Mrs Krasnodebska added: “Mikolaj has been through so much.

“To be born without hearing was awful, but then to have had surgery go wrong it really impacted the whole family.

“Now not only can he hear but he is finally getting back to speed with his peers.

BrainTrainWA was launched in 2013 and uses a form of neurofeedback called infra low frequency training to stimulate learning in the core nervous system and maximise brain performance through neuroplasticity.