Information for Doctors and Scientific Evidence

As part of our service here at BrainTrainWA we will ask our clients for their GP’s details. We will then contact that GP advising them that one of their patients is undertaking a Neurofeedback programme (unless our clients request us not to).

However, if a potential client identifies they are under medical treatment for a condition whose reaction to medication could be affected by Neurofeedback, we will insist that their GP is informed before agreeing to a training programme.

Further down this page we have information about other users of Neurofeedback and a reference resource for you for some of the key scientific literature on the subject.

Initially, BrainTrainWA focused on offering an alternative approach to treating learning difficulties. However Neurofeedback training can assist with many more conditions, as described here. 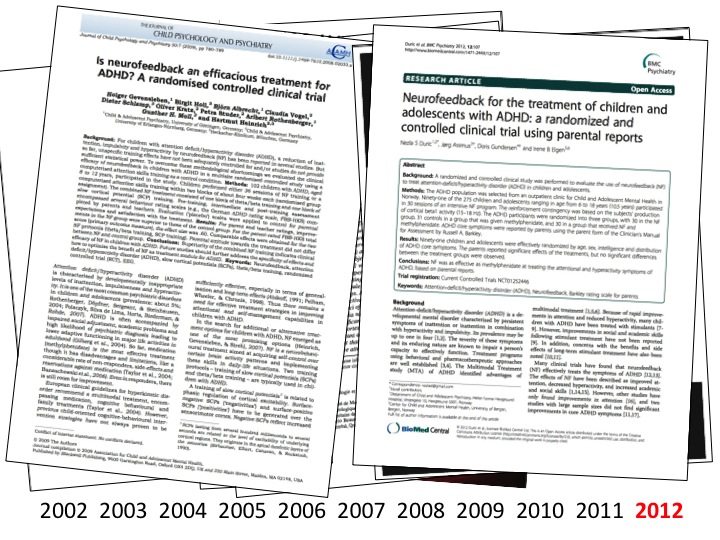 For your convenience we have compiled a list of further reading of the scientific literature on Neurofeedback. This list also contains the references for any scientific claims made on this website.

For an even more comprehensive collection of Neurofeedback research, please see this page on the website of our friends at Brainworks, a Neurofeedback practice in central London.

In October 2012, the American Academy of Pediatrics, the professional body for US paediatricians, published an independently-written report that declared EEG Biofeedback as a ‘Level 1′ Evidence-Based Intervention for Attention and Hyperactivity behavioural problems in children and adolescents. If you want to learn about how they reached this conclusion and some other recent research on Neurofeedback for ADHD you can download our free report.

One of Barry Sterman’s original studies following his accidental discovery that cats who had been ‘brain-trained‘ at a particular frequency were less susceptible to seizures when injected with rocket fuel in research sponsored by NASA. This is one of the studies we often quote when asked if Neurofeedback’s success could be due to a placebo effect:

Once Barry Sterman had replicated this effect in monkeys he then demonstrated he could suppress epileptic seizures in humans:

There are literally hundreds more papers that demonstrate the efficacy of the applied neuroscience of Neurofeedback. If you would like more details please do not hesitate to contact us. If you are a doctor, or parent, and would like further information on the science behind Neurofeedback brain training treatment, please feel free to contact us today on 0207 978 0186. We’d be happy to talk with you.

To read more about this, please read the next page on Other Conditions that Neurofeedback Supports.