It has been identified that the brains of dyslexia sufferers show different activity than those that don’t. 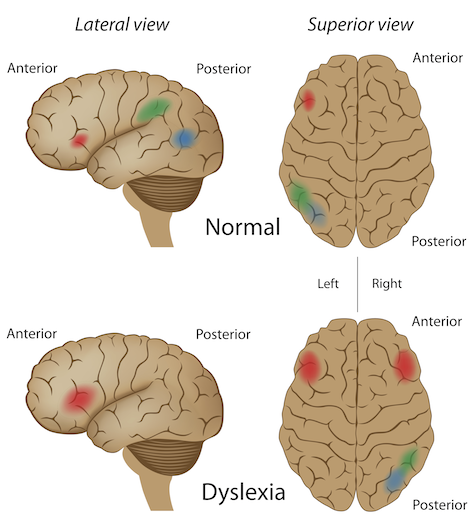 The areas of the brain associated with reading skills, visual distortions and over-sensitivity to light are well understood and Neurofeedback protocols have been established to help difficulties in this area.

Dyslexia is known as a ‘reading disorder’, manifesting in slow progress and difficulties with reading. It is essentially identified by reading achievements being substantially below what is expected given a child’s ages, measured in intelligence and education. Dyslexia significantly hinders (academic) activities requiring reading skills and is associated with certain characteristics.

Like dyslexia, dysgraphia is a neurological disorder. Dysgraphia manifests in difficulties with (hand)writing and is often identified by an inability to write properly, difficulties with fine motor skills/control and pain when writing. The effects of dysgraphia can manifest in several in many ways; poor, incorrect or distorted writing (considering language development), varying sizes of letters and spaces between letters or words and difficulties following a straight line or margin when writing. Other characteristics are associated as well.

The areas of the brain associated with writing are also well understood. This 2012 study showed significant improvement in handwriting for all 24 participants who undertook Neurofeedback training:-

Dyspraxia, is a neurological disorder as well and is considered as a developmental co-ordination disorder (DCD). In general, dyspraxia is identified by difficulties in basic and fine motor skills that affect movement and co-ordination. This manifests for example in a lack of co-ordination and clumsy behaviour, as well as difficulties regarding language, perception and thought. The specific characteristics of Dyspraxia can differ in children and adults, although there are a few overlapping characteristics.

This case study describes the success achieved by a young girl in the UK who undertook Neurofeedback training for Dyspraxia:-

Another neurological disorder is dyscalculia, also called a ‘Mathematics disorder’. Dyscalculia identified by difficulties in understanding and learning mathematics and manifests in problems regarding understanding numbers, learning how to manipulate numbers and math facts. A characteristic that typically occurs is difficulty in counting (back and forth). But again, it depends per individual which characteristic manifests.

The areas of the brain associated with mathematical calculations are also well understood and Neurofeedback protocols are available to improve the function in these areas.

If you are interested to see if your child’s symptoms respond to Neurofeedback as the research has shown they can, please call us today on 0330 111 3299. Your initial consultation is free and you are under no pressure or obligation to proceed.